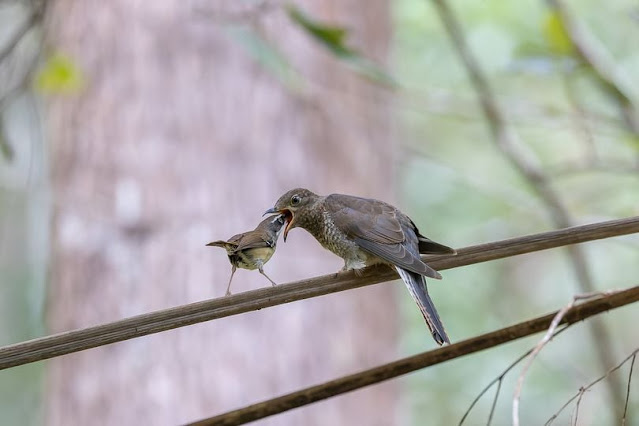 Angela Farnsworth took this fascinating picture at Cilento Park in Nambour, explaining that it's of a juvenile Fan-tailed Cuckoo being fed by its foster parent, a White-browed Scrubwren.

The Cuckoos lay a single egg in a host's nest.

"The chick typically hatches earlier than the host's eggs and then begins to either eject the eggs or the chicks and the parents seem to be unaware of this," Ms Farnsworth said.

"How amazing that they don't recognise that this intruder is not their chick and will happily raise it! The host parents must think they have raised a giant chick!"

-text from  ABC Sunshine Coast.
Posted by Ken Cross at 04:28 No comments:

WEEKEND AWAY WITH THE WADERS

I had had this weekend locked in for some 12 months with Sheryll and Arthur Coates, esteemed veterans [and Children’s Book characters] of the Queensland Wader Studies Group – a sub group of the Queensland Ornithological Society. The date had been chosen for the perfect math between the timing of the seminar on things waders – taxonomy, identification, conservation and migration – and an afternoon high tide. Early in the year the trip filled up and despite some comings and goings of individuals within the group we had 14 people attend. As the trip got closer the weather forecasts got worse and we were all imagining a wild and wet wader weekend.

Thankfully adequate planning and packing of wet weather gear and umbrellas, combined with multiple conversations about alternate plans and locations, the predicted bad weather never occurred. In fact it never came close such that the weather was basically perfect.

We arrived at the Waterloo Bay Hotel Motel on the Friday evening and after a drink or two called it a night.

Our wader seminar followed a Subway lunch with two main presenters - . Their knowledge and enthusiasm for their subject matter was clear. The highlight of the day, for a variety of reasons was the visit to the Manly high tide roost. This site, mostly hidden behind barbed wire fences and impressive pad locks, is brilliant. And the day we visited it did not disappoint.

The visit was to give seminar participants the opportunity to get good views of many of the species mentioned and that promise was fulfilled.  Some 3,000 shorebirds of 20 species were recorded. Black tailed and Bar tailed Godwits, Great Knots, Sharp-tailed, Curlew, Terek and Marsh Sandpipers, Greenshank, Whimbrel, Stilts [whatever adjective we need these days – Pied?], Masked Lapwing plus Lesser and Greater Sandplovers and Red capped Plover, Ruddy Turnstone plus a vagrant to name a few. 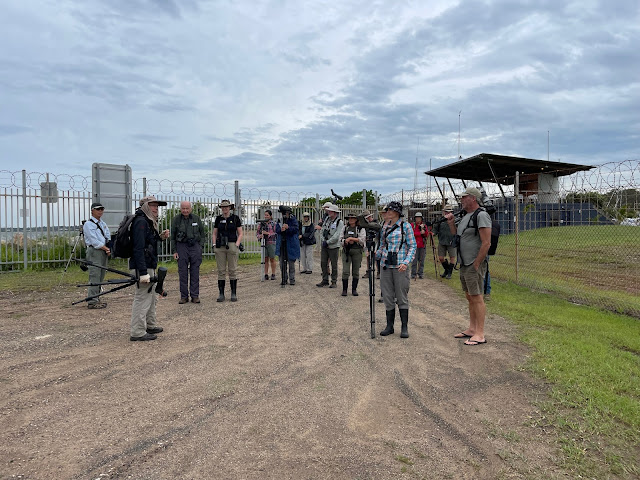 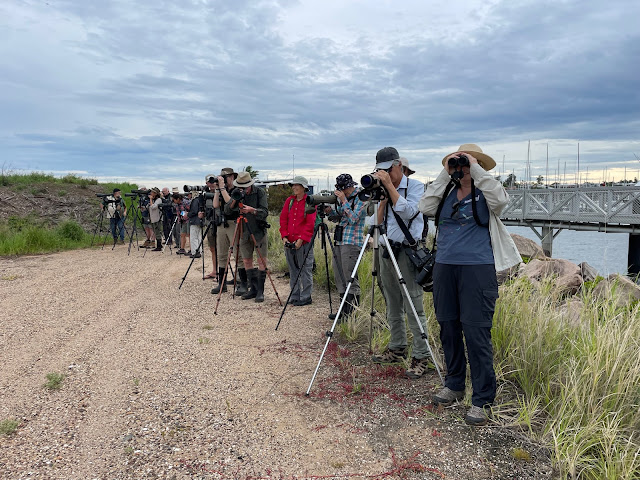 The site also held good numbers of Chestnut Teal. Welcome Swallows and Tree Martins, Australian Pipit were also in attendance. A few good terns including Little, Caspian and Australian [Gull billed] plus Silver Gulls. And other things I clearly have forgotten.

Sunday took us to the Manly foreshore, Manly Mangrove Boardwalk before the Port of Brisbane and then Duhles Rocks Road. The latter, a new site for many, had had recent reports of Pectoral Sandpipers. We tried valiantly but did not manage to convert any of the Sharp tailed Sandpipers into Pectorals and ultimately I was dragged to the bus to return to Nambour.

All in all a good weekend of birding and natural history with a good group of people. I, for one, am looking forward to further weekend aways!

A great morning's birding was had at our monthly walk at Cooran. Thanks to the 20 people who joined us for a meander along the creek side vegetation and congratulations on a great little outing.

Some 80 species were recorded by sight and sound - an outstanding result.

Cuckoos were well represented with Koel plus Little and Shining Bronze, Brush and Fan tailed.

Many thanks to Carol and Steve Popple for guiding us around what is a sensational little area for birding. 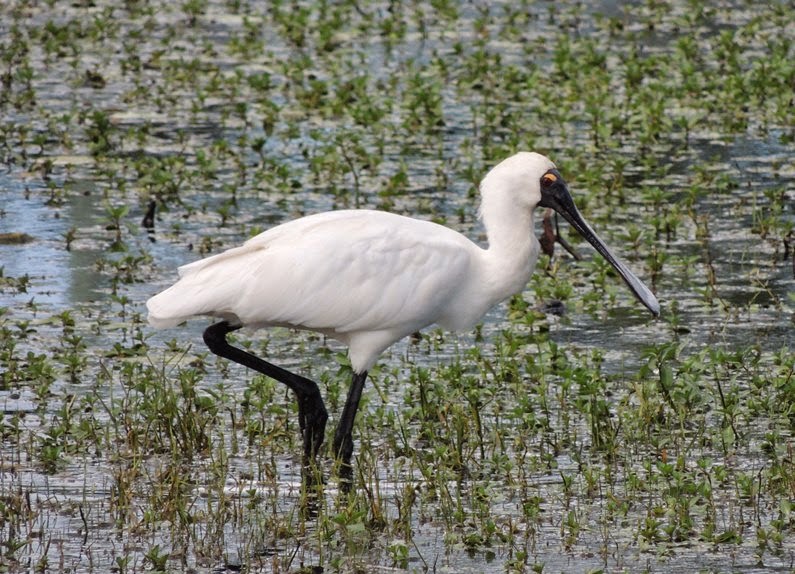 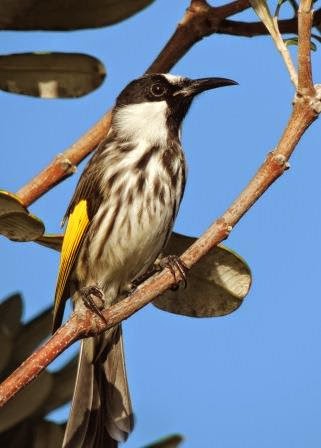